Growing up we tend to hear a lot of stories. As children we nestle down in any available lap, book in hand, presenting our treasure, hoping someone will enjoy it with us. Stories evolve, changing as we do over time. The magic fades from “Happily Ever After’s” and older children to start to hear the underlying tone of “warnings” in stories. Some stories you won’t find written in any books, just the traditional “passed down” stories. Some are made into children’s rhymes, a playground chant seeming innocent, yet full of foreboding. Imagine the childhood stories, (you know, the ones with a warning) you grew up with. Imagine every year the story coming more to fruition; the warnings, the signs, the unexplained disappearances. How much of the story would have to happen for you to believe in it?

The panic attacks are becoming more frequent for Louise Henderson. Even driving, Louise is bombarded with thoughts of fire and fighting for air, yet no recollection of when or how it happened. Her only distraction comes with a phone call- a woman has been found wandering the streets in torn clothing. Assault seems likely. Regaining control, Louise drives to the scene of the crime to meet her partner, Detective Sergeant Paul Shipley. Arriving at the scene, Louise makes an educated guess that the woman escaped through the woods. While interviewing the surrounding crowd, one testimony stands out the most, a little boy’s. He saw the woman walking by and singing.

And just like that, Louise’s stomach drops. Memories of a childhood traipsing through the forest. The stories that were told to young children to scare them. Only Louise’s story has grown wings and come to life. As the Detectives hone in on the case, the only plausible story is The Bone Keeper. Louise struggles between what is fiction and what is fact, making it a possibility of being kicked off the case. Can she put away her blocked past, and focus on the task at hand? Or will she try and connect the dots and make a fictional story come to life?

Note: While I may not look upon some of the things I say as a spoiler, others might. It is never my intention to spoil a book for anyone.

Usually, I do not have a problem telling you which book cover I prefer. I could only find two covers of “The Bone Keeper”, and I have to say, both look pretty good! If I had to pick one, I would probably choose the yellow-worded one. Aesthetically it is the one that I would pick from the shelf. There’s also something to be said about a black book cover- it just seems to make everything else on the cover pop. 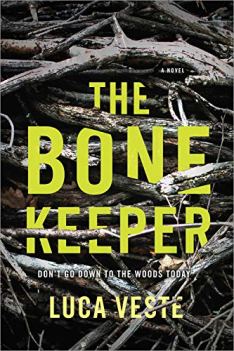 In The Bone Keeper, we see the book switch back and forth from ‘Before’ and ‘Now’. I know some readers do not care for this type of set up, however, it is a key element to the book. Don’t worry, it doesn’t get confusing at all! The book does start in the ‘Before’ (which, I’m not going to lie, scared the CRAP out of me!) but it is an integral part of the story. Without it, you do not have the foundation of the myth the entire story is built around. Once you get into the story, enough detail is given in the ‘Now’ that readers are BEGGING to go back to the ‘Before’ just to hear more of the story.

There are quite a few characters in The Bone Keeper. Whenever there’s a multitude of people to keep track of it can go two ways:

Luca Vesta definitely is a gifted writer when it comes to characters. He has a knack for giving you limited, but important details that stick with you throughout the entire book, and slowly introducing the next set.

Main Character: Louise Henderson- Detective Constable. We meet Louise in the ‘Now’ part of the story. First impressions mean everything, right? We find Louise pulled to the side of the road having a panic (anxiety?) attack. All we can glean from this scene is that she’s remembering a fire, and gasping for air. My immediate impression of Louise is that she’s weak (not because of having panic/anxiety attacks, but just that she’s susceptible of breaking down over the tiniest thing.) Veste definitely proved me wrong with this character. As the story builds, so does Louise. What seemed like a tiny main character, grew into the main character that stormed the pages of the book, demanding attention.

No doubt this book plays on childhood fears and urban legends. Bloody Mary, the hookman, Slender Man, La Llorona, or even movies like The Blair Witch Project come to mind after finishing this book. It goes from hearing them as a child, experiencing it as a rite of passage, and coming to find out the “rumors are true” in adulthood.

I enjoy reading thrillers. These types of books usually keep me reading into all hours of the night just to figure out what is going to happen next. The Bone Keeper actually made me stop reading at night because I was terrified. Yes, you read that correctly. This 31-year-old had to sleep with the light on for the first few nights. It definitely has that creep factor in it.

What else I enjoyed about it was its non-predictability. Don’t get me wrong, there were a few areas in the book where I had the “I KNEW IT!” but upon finishing the book, I am convinced Veste purposely threw those in, like a dog getting a treat, just to make you confident. When it came to figuring out the plot line further in the book, I had several conspiracy theories going- NONE of them turned out to be what I thought! So good job Veste, you bested this reader!

The Bone Keeper is such an easy-going read. Not once did I feel like the storyline or even the characters were forced.

I’m sitting here thinking of anything that was really bad in the story, and I cannot come up with one single thing. If I had to say something it’s the fact that I had to rearrange my reading time so I wasn’t freaked out by this book while reading at night!

Again, I cannot come up with a single thing. The bad and the ugly are more on me as the reader than the author or the story itself. There were times that I felt completely stupid that I couldn’t figure out what was going on. That shows the author’s genius more than anything.

Luca Veste is a new author for me, but he’s already an accomplished author. As far as comparing Luca Veste to other authors I have read, I would put him in ranks with J.D. Barker (4MK series). The Bone Keeper alone has now put Veste on my radar to read other books he has written and books that are to come out. Veste dangles the proverbial carrot, allows a bite, and immediately changes direction- allowing readers to only make assumptions and becoming completely flabbergasted with the end results. Trust me, you’ll lose your balance when he rips the rug right out from underneath you.

“The Bone Keeper” by Luca Veste is available February 5th, 2019! I was chosen by Netgalley to receive a copy of this book in exchange for an honest review. Given that fact, it has not altered my opinion on the book at all.

Click below to find me on other social media sites!